LAVA was approached by a video systems integrator who was operating a collection of televisions dispersed throughout a convention center. The televisions were controlled on their RS-232 ports. Control codes sent through the serial ports gave him basic operation of the televisions. His original design had serial cables using signal amplifiers, led back to a switchbox, which in turn went to a computer.

He was looking to reproduce his deployment in another location, and wanted a less expensive design. Ether-Serial Links gave him the ability to set up a cheaper and more flexible configuration. He was able to eliminate the signal amplifiers, and in places where the televisions were in a bank, he was able to control them with a multi-port serial device server. Doing so meant he needed fewer Ether-Serial Links, and less network cabling as well. 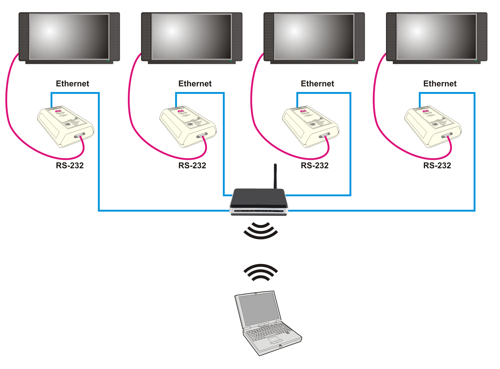 Many types of consumer electronics, not just televisions, are controllable on their serial ports. LAVA Ether-Serial Links make controlling those devices remotely a snap. Hobbyists have cleared many of the obstacles of out the way. The process of controlling a TV (or monitor, in the case of digital signage) is fairly straightforward, and in some cases people make freely available the code that they use to control their devices, using attractive and intuitive interfaces and full command sets.

Serial control of televisions is discussed at sites such as: